What is climate change legislation? 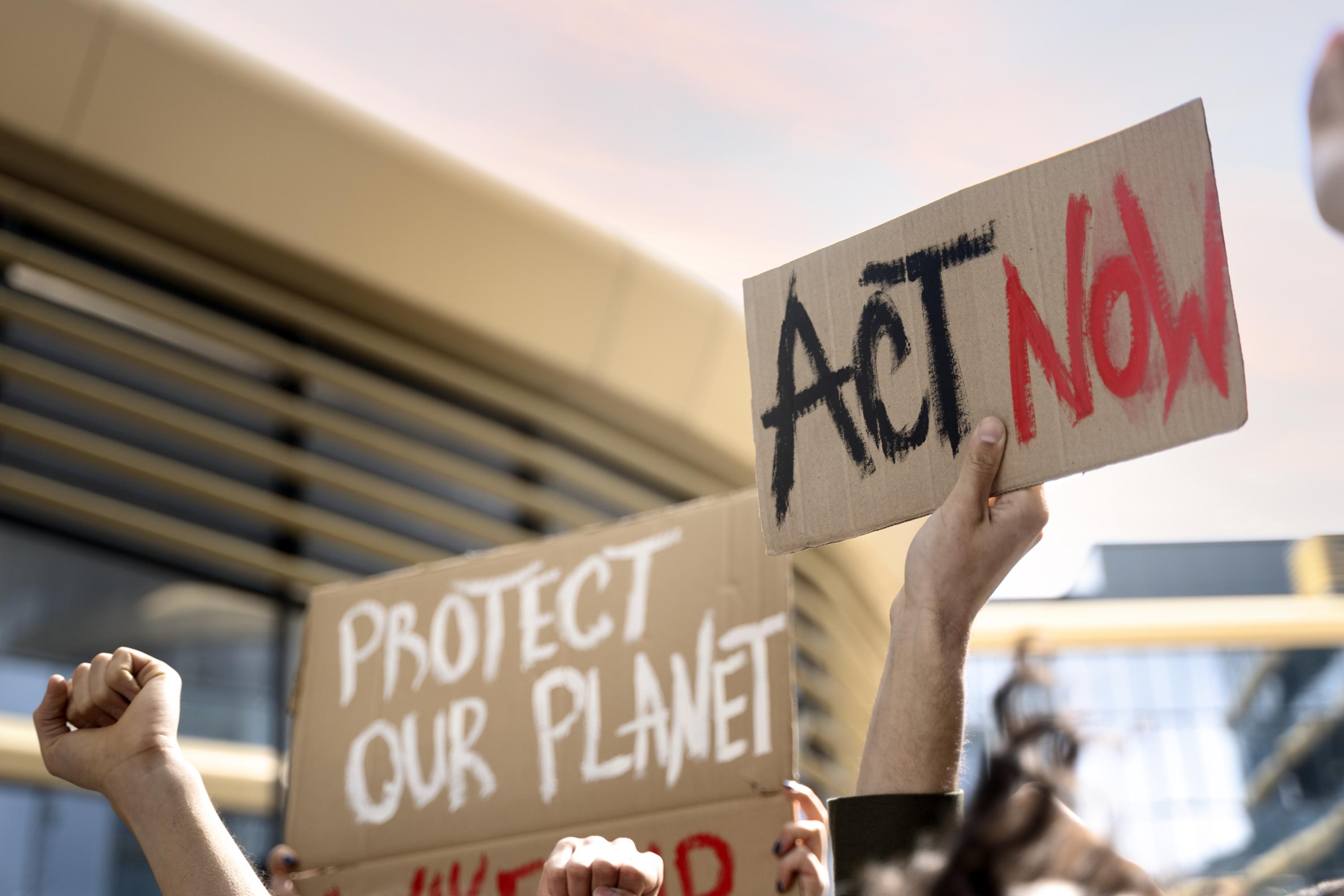 What is climate change legislation?

The term climate ‘framework legislation’ describes an important subset of climate laws that link national and international agendas. Framework climate laws share some or all of the following characteristics: they set out the strategic direction for national climate change policy; are passed by the legislative branch of government; contain national, long-term and/or medium targets and/or pathways for change; set out institutional arrangements for climate governance at the national level; are multi-sectoral in scope; and involve mechanisms for transparency and/or accountability.

World leaders first expressly recognised that climate change needed to be tackled with institutions, rules and procedures at the Rio Earth Summit in 1992. The United Nations Framework Convention on Climate Change (UNFCCC) was subsequently established, with the primary goal of promoting international action to stabilise greenhouse gas emissions. The convening of the UNFCCC parties has led to several milestones, most notably the 2015 Paris Agreement﻿. The Agreement covers mitigation, adaptation and financial burden-sharing, and relies on pledges (the so-called Nationally Determined Contributions – NDCs) made by each UNFCCC party to achieve its goal of limiting global warming to well below 2°C, preferably 1.5°C, above pre-industrial levels.

NDCs summarise how governments plan to meet their commitments made under the UNFCCC. However, alone they are not enough to ensure that domestic action will take place: in most cases NDCs are not legally binding, so countries failing to abide by their pledges cannot be obliged to change tack. Further, they usually offer an overview of intended actions, but they are not granular enough to provide details on how efforts to meet targets will be implemented in practice. Nor do they necessarily represent the intentions of key stakeholders such as citizens, the private sector and non-governmental political bodies, who are frequently not consulted on their content.

The binding nature of national legislation, coupled with the political accountability that tends to underscore decisions made by executive branches of government, make climate laws and policies well-placed to fill these gaps in countries’ NDCs.

What is the extent and sectoral coverage of laws and policies around the world?

The Climate Change Laws of the World (CCLW) database﻿ lists and classifies more than 2,860 climate-related laws and policies in force around the world (as of September 2022). All 193 Parties (192 countries plus the European Union) that have joined the Paris Agreement have at least one law addressing climate change or the transition to a low-carbon economy. At least 2,203 laws and policies deal with mitigation, 1,338 have an adaptation component, and 424 address disaster risk management. Most laws and policies focus on energy, transport, economy-wide issues, and land use, land use change and forestry (LULUCF) (see Figure 1). Recently, there has been growing coverage of social development and the ‘just transition’ to a low-carbon economy, gender and equality, human rights, and food security, with links to climate change.

Figure 1. Number of climate-related laws and policies around the world per economic sector explicitly addressed (January 2022) 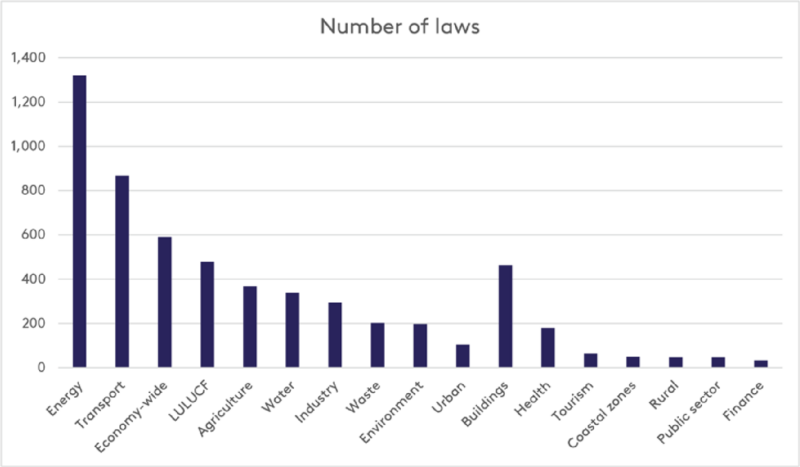 Direct and indirect reference to climate change in laws and policies

Some experts have categorised climate laws and policies as being either ‘direct’ or ‘indirect’. Direct climate laws are those whose main objective is to tackle climate change in some way, while indirect laws have a different primary focus but include some measures that contribute to a government’s climate response. Examples of climate change mitigation measures that are directly the subject of laws and policies include the establishment of national carbon budgets (e.g. in France﻿), cap and trade systems (e.g. in South Korea﻿), or policies to provide additional funding for research and development into low-carbon technologies (e.g. Australia’s Technology Investment Roadmap﻿). Examples of legislation that intersects with climate change action include the UK Pension Schemes Act 2021﻿, a small part of which imposes climate change-related requirements on managers and trustees of pension schemes, and China’s Wetlands Conservation Law﻿, which primarily seeks to promote local environmental functions but includes a carbon sink objective.

Often, rather than being the direct subject of a law or policy, climate change adaptation responses are embedded in a variety of socioeconomic development and planning policies, as well as health and disaster risk reduction (DRR) policies. DRR and also disaster risk management (DRM) laws and policies relate to the types of disasters that are expected to become more frequent due to climate change, such as hurricanes, typhoons, flooding, heatwaves, droughts, forest fires or sea-level rise.

Only a small minority of laws and policies in force explicitly address the issue of loss and damage. These policy measures may include national climate relief funds, risk transfer mechanisms, internal relocation arrangements, social protection programmes and institutional capacity-building.

What are the most common instruments in climate laws and policies?

To achieve their aims, climate laws rely on the creation of policy ‘instruments’ or ‘tools’ that can be broadly classified under five categories:

Lessons from existing laws and policies

From legislation already in force, we learn that more laws are adopted during times of economic prosperity﻿.

Climate change legislation is less a politically partisan issue than is commonly assumed: the number of climate laws passed by governments is roughly proportional to their time in office rather than related to political ideology.

Laws and policies may be most successful when they set clearly defined goals and provide for the creation of detailed policy pathways to achieve them. Recently, many countries have focused on mainstreaming net zero emissions targets: 138 states have now made a net zero pledge. However, targets in all climate-related national laws and policies are currently far from the pledges made in NDCs and from enabling global warming to be limited to below 2 °C﻿. Rapid policy developments are required to achieve this goal.

In countries with a strong rule of law, new laws focusing on mitigation have been shown to reduce annual CO2 emissions by an average of 0.8% in the first three years, and 1.8% in the longer term.

Experience from diverse countries suggests that involving a range of stakeholders, including citizens, the private sector and subnational governments, in the formulation of laws and policies can contribute to their effectiveness because they increase their political legitimacy and long-term acceptance. Framework laws in particular might help developing countries to attract finance to deal with climate change﻿ by increasing the long-term legal certainty of investment regulations. In addition, sets of policies are more efficient than single policy instruments. Accountability mechanisms are essential to ensure that actors follow through on their obligations.

This Explainer was written by Arnaud Koehl with review by Catherine Higham. It draws on the Grantham Research Institute’s Climate Change Laws of the World (CCLW) database, which tracks climate laws, policies and court cases from around the world.